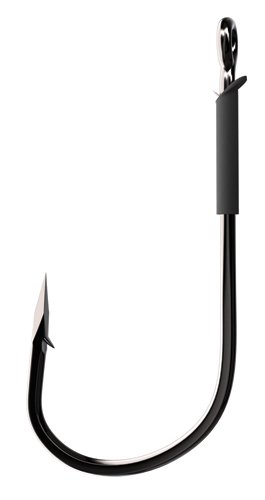 255 Shares
Tackle Test is reader-supported. When you buy products through links on our site, we may earn an affiliate commission. Learn More.

Back in 2016 I tried punching lily pads to catch bigger bass during a tournament. It worked well and I won the tournament with that tactic. But I did run into problems with my hook straightening out at least once. So, 2 years ago I bought some heavier hooks. That led me to write this Lazer Trokar Flippin Hook Review.

Let me preface this by saying that the hooks I was using on the day that I won the tourney were not at all meant for the kind of punishment that I was subjecting them to. But they were all that I had in the boat at the time, so they had to be put to use. Thankfully I only lost one bass due to a bent hook.

Another Day, Another Bent Hook

But then it happened again later on, during another tourney. And I decided that enough was enough. So I started searching for a better hook for fishing heavy cover. And I found the Lazer Trokar Flippin Hook. I didn’t really have much info to go by when buying them,but I know that Trokar is a name that’s been around for a while. So I made the purchase.

When the hooks arrived, I opened them up and checked them out. I was impressed with how rugged they were. I seriously couldn’t see how it would be possible for these hooks to bend with the bass here in New England. So I put them in my boat.

Fast forward several months and I happen to need a rugged hook because I’m probably going to be punching again. The night before the tourney I was in my garage, prepping my tackle for the next day.

I pulled one of the Lazer Trokar Flippin Hooks out of the package and checked the hook point. I wasn’t impressed.

You see, I’m a fanatic when it comes to keeping my hooks sticky sharp. I constantly check my hooks when I’m fishing, whether on a guide trip, a tourney or just recreationally fishing. A sticky sharp hook is a must. So if I find that a hook doesn’t meet my sharpness requirements, I immediately grab my trusty hook file and fix the hook point.

When I checked the Lazer Trokar Flippin Hook, it was only slightly sharp. It wasn’t even close to meeting my own requirements. So I grabbed my hook file and sharpened it every so slightly. I checked it again and it was better, but still not sharp enough.

A minute or so later I had gotten it to where it was acceptable. Not perfect, but acceptable.

I fished the tourney the next day, but ended up not finding any fish by punching. So I never got to really put the new hooks to the test.

Fast forward to this season. I had a hunch that I might need to do some more punching. So I grabbed the rod that I usually use for punching and was about to tie on the hook that I had previously had tied on. But, first I had to check the point. It needed touching up.

Out came the hook file. I began to hone it a little at a time. But no matter how I tried to sharpen that hook point, it just wouldn’t get sharp. I spent well over 10 minutes on this one hook.

And Then I Gave Up

After wasting 10 minutes on that hook, I finally gave up and grabbed a new hook. And that was pretty disappointing in light of the fact that I had only gotten to use that hook on one or two outings. And on both of those outings I never even had a bite.

I pulled a new hook from the package and gave it a really close inspection. I just shook my head as I examined the point of the hook.

I could tell from looking at this hook that I was probably never going to be able to get it sharp enough to satisfy me. And I was 100% right.

I grabbed my hook file and gave it an honest effort. I was able to get it sharp enough to almost satisfy me, which was good enough. But it was impossible to get it “sticky sharp”.

I also pulled the rest of the hooks from the package and found that they were all like this too.

I Will Never Buy These Hooks Again

Based on my experience with these hooks, I will never buy them again. They were a complete waste of my time and money. And I would never recommend that anyone else buy them, either.

As I mentioned at the beginning of writing this Lazer Trokar Flippin Hook Review I made sure to mention that I had bought these hooks in 2016. So it’s quite possible that there have been some improvements made since then. But it will take a lot of convincing to get me to buy them to find out.

In the meantime, I will be on the hunt for a good, stout hook that will work for close contact applications such as flipping and punching. If I find one, I will be sure to write a review on it here and let you know.

A paltry 2 stars for this product. They’re nowhere near worth the price I paid for them.

Here’s another flipping hook you can check out by clicking here.

Lunker City Wide Gap Texposer Hook Review
I have been using the same wide gap hooks for more than 5 years. I decided to try the Lunker...
Read More »