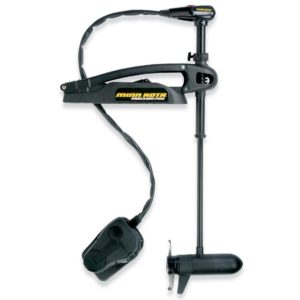 As a bass fisherman, my trolling motor is the lifeblood of my boat. Without it, I’m pretty much dead in the water. I’ve tested and used many different trolling motors, so writing this Minn Kota Maxxum Trolling Motor Review will be a lot of fun because I have year’s worth of data and experience to base my review on.

During my 35 years of bass fishing, I’ve had several different models of Minn Kota trolling motors, including hand control and foot control models. I’ve also owned a Motorguide trolling motor. Yes, just one. That was enough for me.

But I digress. Let me get back to my Minn Kota Maxxum Trolling Motor Review, so I stay on track.

I own a 2007 G3 HP180 bass boat. I bought it brand new in 2008. When I bought the boat, I specifically ordered it with a Minn Kota Maxxum 80 lb. thrust trolling motor on the bow. Why did I choose the Maxxum? Because I had one on my previous boat and it had treated me very, very well.

So, here we are 10 full seasons later, and into my 11th season with this trolling motor. And how has this Maxxum treated me? Absolutely flawlessly. In fact, last week I finally had my first ever functional failure with it, after 10 full seasons of hard use!

Not to worry, though! That functional failure was a tiny little spring in the foot pedal that broke. But that spring was literally a 2 minute fix that cost roughly $.70 to fix. Yes, 70 cents. I was back up and running with less than 3 minutes of downtime. And even when the spring was broken, I was still able to fish for the rest of my trip by improvising and using the on/off switch on the side of the foot pedal.

My Experience With The Maxxum

My Maxxum has been extremely dependable. It has had zero downtime in the 10+ years I’ve owned it.

Many years ago, prior to the Maxxum hitting the market, I owned another Minn Kota trolling motor. It was a great TM. But as it aged, I started having trouble with it snapping steering cables occasionally. It wasn’t frequent, but when it did happen, it was a major inconvenience.

I actually started carrying spare steering cables with me, just in case it happened during a tournament. I had gotten quite good at changing them after doing a couple within a year’s time.

But Minn Kota took this problem very seriously. And they re-invented their cable steering system to make cable failures a thing of the past. So with the several years that I owned my previous Maxxum, and the 10+ years that I’ve owned this one, I have never had to replace a steering cable. Never.

The steering is smooth, accurate and quiet. It turns on a dime. It just plain works.

The Minn Kota Maxxum is a quiet, smooth trolling motor. It doesn’t vibrate. It doesn’t whine. It doesn’t make any oddball noises, like grinding or banging.

Even on the highest setting, it’s still very quiet. Of course I can hear it. It’s generating 80 lbs. of thrust. You’re bound to hear it running when it’s doing that. And that quietness gives me the ability to move using stealth. No, it’s not completely silent. No motor is. It’s a machine, so it’s bound to make some kind of nose. But it’s extremely minimal.

On my 18 foot G3, this motor gives me all of the power I need, even in high winds.

I also fish on many lakes that are horsepower-restricted. And because my outboard is above the HP limit, I rely solely on my Maxxum to move me around for hours at a time. And it does so with no problems at all.

Based on my GPS, the Maxxum will move my 18 foot boat at roughly 3 MPH with it set near high and a medium tournament load in the boat. No, 3 MPH isn’t fast. But it does the trick for me on the small lakes with these HP limits. 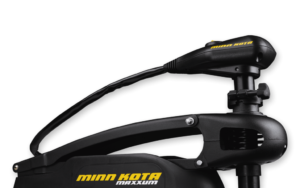 The mount of the Minn Kota Maxxum is one of the things that drew me to this TM many years ago. Unlike some other trolling motors, the mount is designed to absorb impact, allowing the motor’s shaft to kick under the bow of the boat and then pop right back out when the pressure of the impact is gone.

It accomplishes this through a ball-style pivot point and a spring system. If you’re moving forward and hit an underwater obstacle, the Maxxum will absorb the shock and keep going.

The mount as a whole is pretty rugged. The arm is steel, so it’s pretty rigid and handles just about anything you can dish out (within reason, of course).

Many years ago, Minn Kota released the first ever trolling motor that didn’t have a metal shaft. It was made from a composite material that flexed when pressure was applied. It was designed to absorb shock from collisions with underwater obstacles.

Many people scoffed, claiming that Minn Kota’s “plastic” shaft would never survive in the brutal world of tournament fishing. Well, here we are 20 years later, and the composite shaft is still the standard on all Minn Kota motors.

Yes, it does hold up under brutal tournament fishing conditions. When combined with the ball and spring pivot system I mentioned above, it makes the Minn Kota a force to be reckoned with when it comes to fishing shallow water loaded with hidden objects under the surface.

Will it break? I’m sure that it will break under extremely high amounts of pressure. But I have personally never broken one. Nor have I heard of anyone I know breaking one. They’re strong. They last. End of story. 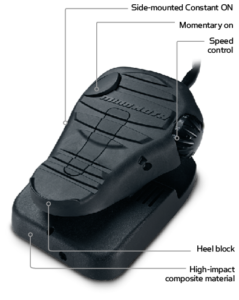 The foot pedal doesn’t squeak or creak, even after 10 years of use in every conceivable kind of weather. This is due mostly to the fact that it is not made of metal. It’s made of a composite material that’s rugged and durable.

The only caveat with the foot pedal is that the black color does attract sunlight in hot weather and will get pretty hot if you happen to be fishing barefoot and step on it with that bare foot!

Thankfully, there is a product called Cool Foot that cures this problem. It’s a thin piece of material that’s cut to perfectly fit the foot pedal of the Maxxum, which keeps the foot pedal cool, even in the hottest conditions. You can check it out here. It’s worth the small price tag it carries!

I do a fair amount of fishing after dark during the summer months. And the lighted directional indicator on the top of the control box is a huge plus after dark. I don’t even have to think about which way the TM is pointed. When I depress the power button to move, it lights up. When I let off, the light shuts off. I just glance down and the red indicator shows me instantly which way the motor is pointed.

I do need to note that the newer models no longer have a red directional indicator. The newer models now use a yellow light instead of the red from the older models. Nevertheless, they do still have this cool feature that makes navigating the shallows after dark effortless when it comes to knowing which direction your trolling motor is pointed when you step on the pedal.

I also like that the Maxxum operates very efficiently. My batteries are never an issue. I can easily fish for 10-12 hours with this motor and not worry about dead batteries.

Oh, and I can’t forget the Weedless Wedge prop. This thing literally cuts its way through weeds. Weeds will not wrap around the weedless wedge.

Way back when Minn Kota first came out with the Weedless Wedge prop, they had Roland Martin promoting it. In the commercials, he stated very confidently, “if you can get a weed to wrap around this prop, I’ll eat it”.

Well, when I got my very first Maxxum, I installed it and then purposely headed to a local lake that’s completely weed-choked in the summer. I fully intended to bring home some weeds to ship to Roland, so he could eat them 😀

But to my amazement, no matter what I did, I couldn’t get a weed to get wrapped around this new prop! And I’m not exaggerating at all. I tried plowing into the thickest weeds I could find, and the Weedless Wedge prop just kept going. Some weeds did get wrapped on the shaft itself, but they cleared very easily.

The prop, though, lived up to Roland’s promise. And I went home without a single weed for him to eat.

Ask me what I think of the Maxxum and I won’t hesitate to extol its virtues. If you ever ask me if I’d recommend the Minn Kota Maxxum to others, I’d confirm that a hundred times.

The Minn Kota Maxxum is a beast and it stands up to anything I’ve ever thrown at it in the last 15+ years.

Weeds are no challenge for the Maxxum. The Weedless Wedge prop is exactly that; weedless. I have yet to find weeds anywhere that would stop this thing.

The Maxxum is durable and reliable. It works when I need it to. And it has lasted me a very long time, with no problems at all.

By now you know where I stand on the MK vs. MG debate. But the cool part is that MK earned its way to the top of my trolling motor list by way of the Maxxum.

So if you’re in the market for a new trolling motor, or doing research in advance, before making a decision on which one to buy, you don’t need to look any further. Save up your money and buy the Minn Kota Maxxum. You’ll be glad you did 😉

You can check out the Maxxum here.

Sierra International Panther Stainless Steel Skeg Protector Repair Kit Review
The day I hit the rock, the first thing I did after I got home was sit down and start...
Read More »

Innovative Angler Transducer Protector Review
Every once in a while, you stumble onto a product that is extremely simple, but incredibly useful. Such is the...
Read More »