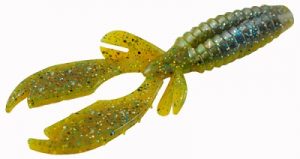 I like a bargain just as much as the next person. I’m not a tightwad, but I don’t like spending money unnecessarily. That’s especially true with expendable things, like soft plastic fishing lures. My search for a good quality, reasonably-priced craw bait led to me writing this Salty B-Bug Craw Bait Review.

So this Tackle Test will be done on a generic soft plastic bait that I found a few years ago. I’ve been using them steadily and increasingly since then. And let me tell you that they flat out catch fish!

The Salty B-Bug is basically a knockoff of the popular Reaction Innovations Sweet Beaver. But they’re available at a fraction of the price of the Beaver or other similar craw style soft plastic baits. And the best part is that paying less doesn’t mean getting less for your money. Not at all.

Quite the opposite, actually. Because you get more baits per dollar, and they work just as well as the brand name baits of the same design.

So let’s get down to the nitty gritty and talk about why I like them, what I like and what I don’t like about them. That is the reason that you’re here, after all. To read about them. Right?

First, as I mentioned above, they cost less than the big name brands. The 4 inch baits, which is the size I fish 98% of the time, will cost you just $1.90 per 5 pack. That’s pretty cheap when you compare it to the Beaver, for example, which will cost you around $5.00 per 10 pk. That’s $1.20 more per pack, if you choose to buy only small packs.

So now that we’re past the math, let’s talk about what really counts; how they work in real-life, on-the-water situations. 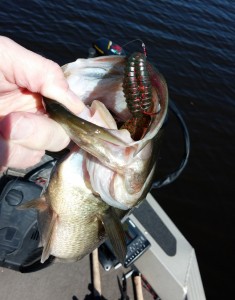 Let me start this part of the review off by saying that I haven’t found a situation yet where these baits don’t catch fish.

I’ve fished them from ice-out in the early spring until the winter freeze here in New England, which typically happens in December. They’ve caught fish, literally, in all 4 seasons. So it doesn’t matter what time of year I use them, they just plain work.

So now that we’ve confirmed that they work year round, let’s talk about the many different types of presentations I’ve used them for, and which ones have worked.

In the area lakes that I fish, there is very little cover that demands a flipping presentation. Almost all of these lakes have natural basins, so there is no flooded timber to flip to. We don’t usually have a lot of shoreline cover that requires flipping, either.

There is one exception to this, and that would be weed mats. Lily pad mats and hydrilla/coontail weed can create some great areas for flipping into open pockets. I have done this on many occasions. Because of the compact style of the body, this bait excels for flipping.

There are no long appendages to get caught on the cover. The bait just slides right into those pockets, waiting to get hammered by a bass hiding in the shade of the overhead cover. And let me just say that the bass love it when it slides into their turf, presenting itself as an easy meal for an opportunistic feeder.

But, as I mentioned previously, this isn’t the prevalent type of cover.

But there is a fair amount of cover where a pitching presentation can be utilized. So this I have done on many, many lakes, with great success. Boat docks, shallow rock piles, lily pad edges, etc., are all great pitching targets. Even the occasional laydown log or fallen tree makes a great pitching target. And the Salty B-Bug has fished really well this way, catching hordes of fish. And some of them have been BIG ones, too.

There’s nothing quite like setting the hook on a big bass buried in a laydown log jam and seeing a giant head come out of the water, trying to shake that wide-gap hook from their jaw!

Now, let’s talk about punching mats. I mentioned earlier that I have done a small amount of flipping into mats. But I have also done some mat punching with the Salty B-Bug, and it has absolutely crushed the bass this way. Again, the compact body style, with the lack of long, stringy appendages lends itself to punching perfectly.

During this past summer, I was fishing a tournament on a local lake in nearby Connecticut. I started the morning out by landing a limit of bass up to 2 lbs. And I was still getting bit, but the size of the bass wasn’t increasing. I needed some big bites!

So as I moved around in one particular cove, the sun had broken through the morning fog and was getting high overhead. It was bright and the sky was blue. I happened to notice that a group of lily pads had an abundance of dark shadows under it, as well as what looked like about 3 feet of water.

I knew as soon as I saw it that I needed to somehow get a bait down into that open water under those pads. Once again, the Salty B-Bug got the nod. And before a couple minutes had passed, I had rigged a heavy action rod with a Salty B-Bug on a 3/0 wide gap hook and a 1 oz. bullet weight, pegged tight to the eye of the hook.

As I pulled up to the first set of lily pads, I pitched the B-Bug onto the top of the pads and the weight of the 1 oz. sinker caused it slide neatly through the overhead cover, bringing the bait down into the shady area almost immediately.

No takers. So I retrieved the bait and pitched it into another spot in these pads. Rinse & repeat. It didn’t take too many pitches before the line jumped sideways and I drove the hook home into a big bass. I yanked hard and the bass came crashing through the canopy, toward the boat. I slid the net under it and hoisted it aboard, shaking like a little kid in a candy store 🙂

This scene was repeated 3 or 4 more times, giving me some super nice upgrades to my total weight, and the tourney win. Thanks to the B-Bug, it all came together nicely. So add mat punching to the list of methods where the Bug will shine brightly.

And, last but not least, I do quite a bit of open water fishing with the Bug. There are a lot of great offshore weed lines, humps, rocks piles and other forms of cover/structure that I fish during the year. And the Bug has produced for me in all of those places.

Let’s Talk About Time of Day 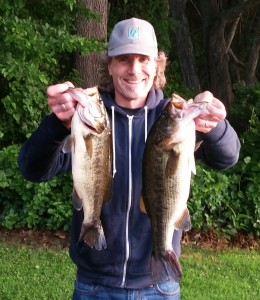 The Bass in My RIght Hand was Caught on a Salty B-Bug at Night. It weighed 4 lbs.

I have to admit that fishing this bait at night was a bit intimidating at first. It’s compact. It has very little movement, except for whatever motion I impart into it. No bulk. No vibration. No sound. Hmm…These facts make it seem like the opposite of a good night fishing lure.

Surprise! It catches the heck out of the bass after dark!

In the photo to the left, I’m holding two bass caught during a night tournament with my bass club. The one in my right hand was over 4 lbs. The one in my left was 5 lbs. The 4 lber was the first fish I caught at the beginning of the tourney, on the Bug.

There was a row of lily pads along the shore, where the water dropped off from 3 feet to about 11 feet deep. I pitched the Bug to the edge of the pads and it took off like rocket almost as soon as it hit the water. A short time later, that 4 lb, bass took up temporary residence in my livewell for the night, thanks to the Salty B-Bug.

I’ve caught tons of bass on this bait after dark. My biggest to date during the night hours was 5 1/2 lbs. And they’ve come from depths as little as 1-2 feet, to as deep as 13-14 feet. Again, this bait catches fish in just about any depth, at various times of the day, in many types of cover or structure.

Now, let me talk a little about some of the other things I like about this bait, and then I’ll talk about how I rig it and fish it.

First, I like the price. I already covered the specific numbers above, so I won’t reiterate that again. But suffice it to say that these baits are a fantastic value for the money.

Next, I like the durability of these soft plastic baits. They hold up really well in real-world situations. It’s not unusual to catch as many as 5 bass on one Bug. If a person was to rig them on a hook with a wire twist-lock or hitch-hiker used to secure the nose of the bait on the hook, it could add several more fish to the life of that bait. Believe me, they’re durable.

The bug is versatile. As you read above, they can be fished in an almost unlimited number of ways. And just about any way you fish them, they will catch fish!

The Salty B-Bug is easy to fish. In fact, the less you do with it, the better they catch fish. A whole lot of the fish I have caught have hit the bait on the initial drop after the cast or while it was sitting on the bottom, doing nothing. I also catch fish by simply dragging it along the bottom, not just the standard hop & drop retrieve.

One thing I want to mention is that I ALWAYS leave the claws fused together. For whatever reason, they work well that way. In fact, on more than one occasion, I have out-fished someone else in my boat who was using a similar bait with the claws separated. My thought on this is that it creates a subtle presentation that doesn’t give any clues as to the fact that it’s not real. Whatever the reason, it just works for me that way.

Now, let me touch on the two things that I view as a negative for the Bug.

First, the bait uses a hook slot. I don’t like hook slots. I think they’re a nuisance. I believe hook slots are a weakness in any soft plastic bait. I just plain don’t like them, at all.

The other negative thing I want to mention is an occasional inconsistency in colors. I have seen a huge difference in some orders. It probably hasn’t caused any problems with the bait’s ability to catch fish, but it’s always nice to know that when you order a specific color, it will arrive and look the same as the last batch you ordered.

So that’s my review of the Salty B-Bug. As always, my rating of this bait will be based on it’s overall value.

Based on the cost of these baits, their ability to catch fish, their durability and their versatility, I wholeheartedly recommend these baits. Taking that into account, along with the two negatives that I mentioned, I am giving them a 4.5 star rating.

If you’ve never heard of these baits, you owe it to yourself to try them. I promise you’ll be pleasantly surprised. And there’s a really good chance that you’ll buy them again in the future.

You can check out the Salty B-Bug by clicking here.