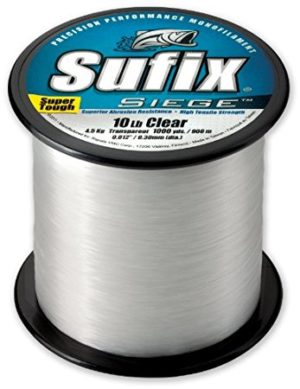 285 Shares
Tackle Test is reader-supported. When you buy products through links on our site, we may earn an affiliate commission. Learn More.

I’m the type of person who sticks with a product when I find one that I like. Fishing line is no different. I’m not one to hop on the bandwagon and try every new thing that comes along. So it’s a bit unusual to find me writing this Sufix Siege Fishing Line Review. Let me explain.

I’ve used Big Game in 15 lb., 20 lb. and 25 lb. test, on a few different outfits. The 25 lb. test is still used to this day on my heavy action rod with huge topwater swimbaits. I can chunk this heavy bait and catch big bass with no worries about the line snapping while hauling a big bass out of the water, especially after dark. I’ve absolutely never had this line break. But I digress.

Can you tell that I’m passionate about Big Game line? Now you can believe me when I tell you that when I like a product, I stand by it and swear by it. And it takes a lot to change my mind about that product.

Well, a couple seasons ago I happened to see some fishing line in the tackle department of a well-known sporting goods chain store. I had heard the name before, but had never really paid attention to it. But for some reason, this line caught my eye.

Now, don’t laugh when you read this, but there was something about the way it laid on the spool that just looked different. I could tell that this line was smooth and would behave itself on a reel. This obviously didn’t tell me how it would hold up to brush, heavy weeds and rocks. But I just had a feeling that this was good line before I ever touched it. 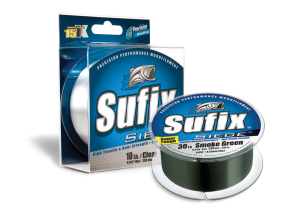 Sufix Siege has become my go-to line for baitcasting applications.

Oh, and before I get carried away here, let me tell you what the line is that I’m talking about. It’s Sufix Siege. And I prefer it in Smoke Green color.

I buy it in 14 lb. test and 17 lb. test. I use the 17 lb. test for my spinnerbaits, buzzbaits, bladed jigs, flipping tubes and many other types of baits.

I’ve fished with this line in rocks, brush and weed mats, and I have not had it fail me even a single time. I have landed bass up to just under 7 lbs. on this line and never once worried about it breaking. So after using Sufix Siege for two complete seasons, I can write this review with full confidence that it performs flawlessly.

Remember what I said about Berkley Big Game being my favorite line? No longer! That’s not to say that I no longer use it. I do, but only for limited applications. For the 20 lb. and 25 lb. test situations I mentioned earlier, I still use Big Game line. All other baitcasting setups are now spooled with Sufix Siege.

So let’s talk about what makes this line so good. Why do I rave about it after using it for two seasons, on 8 or 10 of my rods and reels?

Low Stretch – Sufix Siege is a low stretch line. Let me clarify that, though, by saying that it is moderately low stretch. It has more stretch than fluorocarbon line, which stands to reason, since it’s monofilament. But when I set the hook, I do so knowing that this line has the oomph to drive it home and then haul the fish into the boat. Yet it has enough stretch to be forgiving when I need it to be.

Abrasion Resistant – Sufix Siege has excellent abrasion resistance. As I mentioned earlier, I’ve fished with it around a ton of rocks. I live in New England. The lakes that I fish are loaded with boulders, and that’s where I spend a lot of my time fishing. I also fish in a lot of laydown brush on a few of the local rivers. It’s the primary cover on these bodies of water. I have yet to have this line break off due to abrasion, fraying or any other cover-related problem. 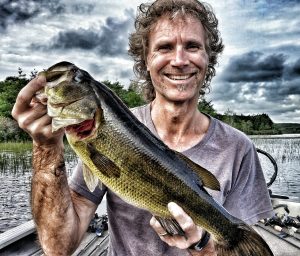 I’ve also used it in some pretty dense weed mats. During a tournament this past summer, I used the 17 lb. line while punching lily pad mats with a flipping bait and a 1 oz. pegged bullet weight. I pulled 4 big bass out of the heavy stuff and never batted an eye about it.

I fish this line around any kind of cover I can find, using a myriad of different kinds of baits. And I do it with complete confidence in my line, knowing that there is little chance of losing a fish due to line breakage.

Increased Casting Distance – When I first started using Sufix Siege, the very first reel I tried it on was a Shimano Curado 200 E7. The Curado E7 is a fantastic reel, with smooth bearings and the ability to cast smoothly, and at great distances.

So when I made my first few casts with Siege spooled on my Curado, I was shocked when my spinnerbait went close to 20% further than normal. Seriously. I can honestly say that switching from Big Game to Sufix Siege increased my casting distance by up to 20%!

I couldn’t believe it. So I spooled up another reel with the new line. And guess what. I had the same results.

There’s something special about the way Sufix Siege lays on the spool that makes it glide off the spool and through the guides on your rod. It’s smooth. The line acts as though it has a special coating on it to make it slide. Maybe it does have a coating, but I’ve never researched it to see if it does or not. Just trust me when I say that your casting distance will improve if you spool up with Sufix Siege.

And remember what I said about how it looked impressive on the spool in the store? It’s that quality that makes it cast like it does. It’s tough, but yet limp at the same time. That’s something that’s hard to find in fishing line. It’s almost like the perfect balance.

Low Memory – The properties of Sufix Siege are such that it has very little memory. I’ve fished with it in temperatures ranging from the high 30s to the mid 90s, and it behaves itself perfectly across that entire range. It will obviously display a bit more memory when it’s 40 degrees than it will when it’s 70, but not enough to even worry about. It just behaves itself really well. 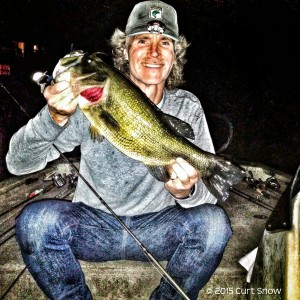 Reasonable Cost – Sufix Siege won’t break the bank. There are two considerations here. The first is that the cost to buy it isn’t outrageous. I buy it at the aforementioned sporting goods chain store for roughly $8.00 for a 300 yard spool. That’s not too shabby when you compare it to most other lines.

The second factor is that it lasts a long time, so you don’t have to replace it very frequently. Between March and November, I fish at least twice per week. Sometimes as many as 4 or 5 times in a week, depending on how many guide trips I have.

Even fishing as often as I do, I don’t find myself having to frequently swap out old line for new line. I’m picky when it comes to my line. I constantly check for nicks or other problems while fishing, so if my line starts to deteriorate, I’ll notice it quickly. And then my line gets changed out.

But with the Sufix Siege, I honestly get two months out of a fresh re-spool on a baitcasting outfit. That’s not too shabby at all with the amount of fishing I do and the types of cover I fish.

So, there you have it. Do I love Sufix Siege? Absolutely.

Do I recommend it to others. Absolutely!

I can honestly say that it’s my absolute favorite line for my baitcasting outfits that are spooled with mono. In fact, this is one of my all-time favorite lines. I haven’t liked a line this much since way back when Berkley used to make Tri-Max line. And that was a long time ago!

I give Sufix Siege a wholehearted, unabashed 5 stars, for value and product quality.

So if you’d like to pick up some Sufix Siege for yourself and find out how really awesome it is, Click Here.

Sunline Super Fluorocarbon Fishing Line Review
I am using more and more fluorocarbon line these days. This line is new to me, so I wanted to...
Read More »

mpeter Armor Braided Fishing Line Review
Way back in the 1990s I remember when spectra-based fishing lines hit the bass fishing scene. They were all the...
Read More »

Stren Fluorocarbon Fishing Line Review
With all of the different brands of fluorocarbon fishing line available, what caused me to want to try Stren? A...
Read More »