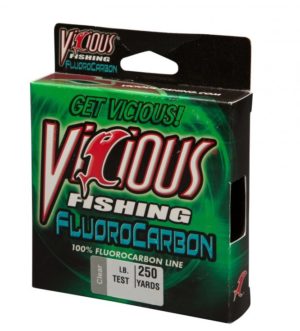 I like fluorocarbon fishing line. I really like it for specific applications. It’s strong, tough and sensitive. To me, it’s the best line for fishing with soft plastics, jigs and other baits that require more sensitivity to detect subtle bites. I fish it confidently in brush piles, weed mats and rock cover, with no fear of it failing when I set the hook and fight a big fish out of heavy cover.

Well, let me clarify that. I have confidence in some fluorocarbon lines. But Vicious Fishing’s 100% fluorocarbon line isn’t one of them. Stick with me for the next few minutes and I’ll tell you why I would make a statement like that.

Now, before I go further, I know some of you are probably wondering why I use fluorocarbon line for fishing heavy cover, instead of braid. That’s a good question!

Way back in the 1990s, when braid first hit the market, I tried several of them. They were OK, but I never really fell in love with any of them. So I stripped the braid off of whatever reels I had it on and never looked back. Today, I use mono or fluoro on all of my rods and reels.

For baitcasting, I prefer Sufix Siege, which I wrote a review on recently. For my spinning gear, I used Berkley Trimax for several years, until they stopped selling it and I used up the stock that I had. Now I use basic Stren mono on all my spinning outfits.

Anyway, back to the product review at hand. I usually use a different brand of fluorocarbon line on a couple of my baitcasting outfits. I’ve been using it for several years with no problems whatsoever. But I ran into a little problem last week with a massive backlash that was beyond picking out.

I rarely backlash, but I had hooked a fish in a sunken tree and the fish wrapped me up in the tree limbs and said bye bye. So I went to the tree, got my hook dislodged from the wood and then checked my line. I could feel a rough spot a few inches up, so I cut off 6 inches or so and re-tied. Foolishly, I didn’t even think to check further up the line for nicks or abrasions.

So, on my next cast, the bait promptly snapped off and sailed through the air, leaving me with the mother of all backlashes. Totally, 100% my fault.

After wasting 20 minutes or more trying to pick that birds nest out, I finally gave up and grabbed another rod and reel. I would tackle that backlash at home, where I wouldn’t be wasting valuable fishing time.

A few days later, I took a razor blade to the gnarly mess and got rid of it. Unfortunately, I didn’t have any more of that brand of fluoro line available to spool back on my reel. So I opted to try the spool of Vicious Fishing 100% fluorocarbon line that I had bought recently at Wal-Mart.

I spooled it on and wasn’t too impressed with what I saw, even during the spooling process. The line seemed to be pretty stiff and unruly. Oh well, it was pretty cold in my garage, so I thought maybe it was just the cold temperatures that were the problem.

I finished spooling the line on, jumped in the truck and headed off to the lake, with my boat in tow behind me. 15 minutes later, I was on the water and ready to rip some lips 🙂

I started using the setup with the new line almost immediately, since that had the bait on it that I catch most of my fish on this time of year, on that particular lake. I knew immediately that I wasn’t going to like this new line as much as my usual line. But hey, I wanted to give it a fair shot, so I kept fishing.

As I fished more, the line exhibited behavior that just didn’t feel right. It was stiff and unruly. Granted, fluorocarbon line is never as well-behaved as most mono, so I expect that from fluoro. But this line was worse than normal. Much worse.

I had to make several adjustments on my spool to keep from backlashing, which never happens with my usual line. And when the bait would hit the water and I would engage the spool, it always seemed to cause a bit of loose line on the spool that would end up with a small loop in it. I had to make several long casts to nowhere at all in order to keep getting rid of this loose line. Wasted fishing time right there.

As the time passed and I made more casts, I started noticing something white on my reel. It looked like little, tiny white fibers. I brushed them off and kept fishing. A short time later, I saw more white stuff, so I took a closer look. I wanted to see what this stuff was that I had never seen before.

It turned out that it was little pieces of fluoro fibers from the line, gathering on my reel. I should have gotten a picture of it, so I could show it to you. But I didn’t think of that until after I had brushed it off the reel again. Oh well.

As the rest of the trip went by, I grew more and more irritated with this line. It just didn’t perform well at all. And the fact that it was literally shredding on my reel as I used it didn’t give me the warm fuzzies, either. I had seen enough to know that this particular brand of fishing line would never see any of my reels again. Ever.

So, without making this review any longer than it needs to be, that’s my experience with Vicious FIshing 100% Fluorocarbon fishing line, in the 15 lb. test size. I will never buy it again.

Now, I do want to mention one last thing, just to give the line the benefit of the doubt. I bought this spool of line from the local Wal-Mart. So, in light of the fact that I bought it somewhere that doesn’t necessarily sell a high volume of this line, it may have been an old spool. I might have gotten a product that had passed its expected shelf life.

If that was the case, the behavior I saw exhibited could possible have been from the line being old. But something tells me this isn’t the case.

Either way, I will most definitely not be buying any of it again.

So that’s my review of Vicious FIshing 100% Fluorocarbon fishing line.

Based on the cost of this line and my experience with it, I’m giving it just 2 stars. I seriously want to give it only 1 star, but because there is the slight possibility that this line was old and had been sitting on the shelf for a very long time, I’ll give it 2 stars.

Sunline Super Fluorocarbon Fishing Line Review
I am using more and more fluorocarbon line these days. This line is new to me, so I wanted to...
Read More »

mpeter Armor Braided Fishing Line Review
Way back in the 1990s I remember when spectra-based fishing lines hit the bass fishing scene. They were all the...
Read More »

Stren Fluorocarbon Fishing Line Review
With all of the different brands of fluorocarbon fishing line available, what caused me to want to try Stren? A...
Read More »