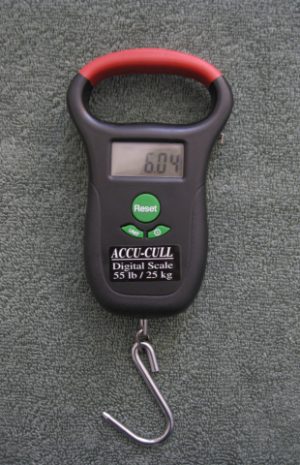 This Accu Cull Digital Scale Review is kind of an odd one for me to write. You’ll understand why as you read further.

Over the years I have used several different brands of digital scales in my bass boat. I have used Rapala, Berkley, Mustad and now the Accu Cull Digital Scale.

They have all had their pros and cons. This scale is no different. But I won’t waste time talking about any of the other scales. So let’s get on with the business at hand, my Accu Cull Digital Scale Review.

I have to admit that my initial impressions were mixed. Here’s why.

First, when I took my new scale out of the package, I could hear something rattling inside the scale. This was a bit disappointing. But when I pressed the Power button, it turned on immediately, so I was relieved at that.

I then spent some time weighing some things and it seemed to be quite accurate. All was well with that. 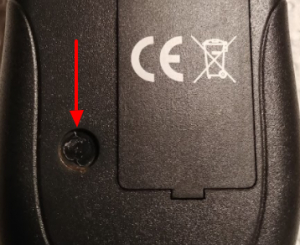 When I first took the scale from the package, I noticed a small metal disc attached to the metal hook that’s used to hold the fish you’re weighing. I had no idea what it was for at first. But I did notice that it was magnetic, since that’s how it had attached itself to the weigh hook. Then, as I looked the scale over a little more closely, I realized that it was actually a small magnet that was supposed to be glued into an indent on the back of the scale.

That magnet was supposed to hold the weigh hook in place against the back of the scale during storage. A neat idea for sure, but not if the magnet wasn’t glued in place properly.

Once I figured that out. I put a couple drops of super glue on it and stuck it back in place on the scale’s back side. Problem solved, at least for now.

As I mentioned, this scale had a small piece of something floating around inside it. Every time I moved the scale, it rattled. And I have to admit that it was a bit annoying. But it didn’t seem to bother the operation or the functionality of the scale.

I had contacted the owner of Accu Cull and mentioned it to him. He told me that if I wanted to take the scale apart to see what it was, he would be more than happy to replace it if it it stopped working afterward or if it was something critical to the operation of the scale. But I didn’t have the time to disassemble it until just recently. And it still worked all season, despite the spare something floating around in there.

As it turns out, I did take it apart. What I found was a small piece of solder that had gotten dropped in there during production and was never removed. So I simply removed it, reassembled the scale and all is well with it. No problems afterward. And now I have a scale that doesn’t annoy me every time I pick it up 🙂

But How Well Does It Work?

Let’s move on to how well the scale functions and what I like about it.

First, it powers on easily and in a very short amount of time. The display is clear and easy to read in any conditions, day or night.

The scale can be set to use kilograms, lbs. & oz. or lbs. & 100ths. This is great for every tournament angler, no matter where they fish. My bass club uses a scale that weighs in lbs. and hundredths, so I just set my scale to use that measurement mode. And it weighs up to 55 lbs. So it’s way more than sufficient for just about any freshwater angler.

Weighing a fish is also effortless. You hang it on the scale and in a very short time it gives you the weight and locks it on the screen. When you remove the fish, the weight stays on the screen until you clear it or until you shut it off. And, when you turn it back on, that number is still there, so be sure to hit the Reset button before weighing your next fish.

The fact that the weight stays on the screen is a very handy feature that I have used many, many times. I can’t tell you how many times I have weighed a fish, tagged it and put it in the livewell and then forgotten the exact weight. WIth this scale, all I have to do is look at the screen and the weight is still displayed. Super easy!

The backlight on the screen works great for weighing fish at night, which I do a lot of.

The numbers are large and crisp. The only time I had difficulty seeing them was when wearing my polarized sunglasses. Looking at it at various angles in the bright sunlight can cause the numbers to seem a bit faint, but changing the angle or removing my sunglasses fixes that problem easily.

Let’s talk a little about weighing fish, since that’s its primary function.

As I mentioned previously, it weighs fish pretty quickly, and the weights it registers are also very accurate.

Very few bass will hold still when they’re being weighed. Some handheld scales will absolutely freak out when this happens, never locking in on a weight or taking forever to do so. But the Accu Cull scale handles this quite well, locking in on the weight even if a fish moves a little.

I pretty much hate the hooks on all digital scales. You know, that useless metal hook we’re supposed to weigh fish on?

First, it’s just cumbersome and clumsy to hang a fish on it. It moves all around when trying to get the fish hung on it. And then it’s tough to know exactly how to hang the fish so it won’t flop off or somehow injure the fish. 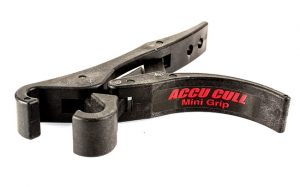 So, I have the perfect solution for this problem. Well, it’s actually Accu Cull’s solution. It’s called the Mini Grip. And I have to tell you that this is one of the best tools I have in my boat for weighing fish effortlessly without the worry of them coming off the hook.

It also prevents injury to the bass because it doesn’t require the fish to be punctured or hung precariously under the gill plate, where damage to the gills is more likely.

The Mini Grip opens and closes easily with one hand. And once it’s clipped onto the bass, it absolutely doesn’t let go, no matter how the fish shakes or flips its tail around. It also has holes in it so it can be hung on any digital scale with one of those cumbersome metal hooks on it.

Even if you don’t need to buy a new scale, you absolutely need to buy the Mini Grip. It’ll save your sanity when you’re weighing fish.

Back to The Accu Cull Digital Scale Review

I do also want to mention that this scale has a 38 inch tape measure built into it. It’s nestled inside the scale, just over the digital display. It pulls out of the side of the scale and retracts when you let go of it. I personally have never used the tape measure in mine, but it’s something handy for someone who shore fishes or who doesn’t carry a Golden Rule or other ruler with them.

It also has a thermometer that will display the air temperature if you want it to. Again, as with the ruler, I have not used this feature. But that’s only because most of the fishing I have done while using this scale has been done during warmer months, when I wasn’t too concerned with the air temperature. It’s nice to know it’s there if I happen to need it, though.

As my review indicates, I have had no serious problems with this scale. I believe it’s a very good value for the price point it’s at. I have seen many other scales selling for this price or slightly higher that do no more than weigh a fish, with no additional features.

So, again, I believe its worth the price of $31.49. In reality, the price was a bit higher when I got mine. So the new price is an even better deal.

I have used it on some pretty damp nights, where everything on the boat was extremely wet. And I have used it in one or two tournaments with some rain off and on, with no negative impact on it.

When I’m not using it, it gets stored inside of a Plano box in the cockpit area of my boat during a tourney. And if I’m not fishing, that Plano box gets put inside of a water-tight storage locker in my boat. So, even though I have used it to weigh fish in very damp conditions, and during rainy conditions, I have never let it sit out in the rain.

My recommendation would be that it not get left out in the rain. Again, I don’t know if it will cause problems. But why take the chance? Put it somewhere out of the rain when you’re not using it. And that will eliminate any chances of it being damaged by rain water.

As I mentioned at the beginning of this review, I found it a bit difficult to write this. I said that because I really like the scale overall. And I believe it’s a good value for the price.

But I think there is room for some improvements. I feel like the quality control at the manufacturing level could be improved. This was evident in the fact that the magnet fell off the back of mine before it was ever taken out of the package. It was also evident in the fact that my scale rattled when it was taken out of the package. Both of these things should not have happened, in my opinion.

On the other hand, I have found Accu Cull’s owner to be extremely helpful, with extraordinary customer service. He goes the extra mile, and then some. And as I have mentioned in other reviews, that always counts for something in my reviews.

So, taking all of this into consideration, I am giving this product a very solid 4 stars.

You can check out the Accu Cull Digital Scale by clicking here.

Dr. Slick Hook Sharpener File Review
Dull hooks are one of those things that are without excuse. There is absolutely never a good reason for having...
Read More »