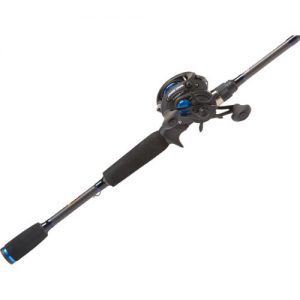 189 Shares
Tackle Test is reader-supported. When you buy products through links on our site, we may earn an affiliate commission. Learn More.

This question can be a bit tough to answer in a straight forward way. Why? Because it has multiple answers that depend on a few different factors. What are those factors?

1. Budget. The amount of money the angler is willing to spend will have a direct impact on how I answer that question. So I will almost always ask them how much they have to work with before giving them any kind of answer.

3. Lastly, I ask them whether they fish competitively or just for recreation.

Here’s why I ask those three questions.

When it comes to the best baitcasting combo for beginners, I can recommend two or three different combos as being the best for beginners. Each one will be a good piece of equipment, but they will have different price points, as well as varying levels of quality and longevity.

Let’s Talk About Budget and Price

It would be easy for me to send someone to the store to buy the cheapest combo available. But there’s a good chance that this very same person will be sorely disappointed with their purchase and they will never want to touch another baitcasting combo again.

Cheap baitcasting combos, especially those brands that are unknown, are bound to be junk. It’s just common sense. China and other countries are pumping out junk fishing tackle left and right. It’s flooding the market and making it harder and harder to find good quality rods and reels.

The junk reels nestle themselves in amongst the good products on the store shelves. And for the uneducated buyer, they are apt to be convinced that saving a few dollars is getting them a bargain. In reality, though, it likely buying them a headache and a piece of equipment that’s inferior and will not last them long at all.

So, where’s the balance? What is considered a happy medium? 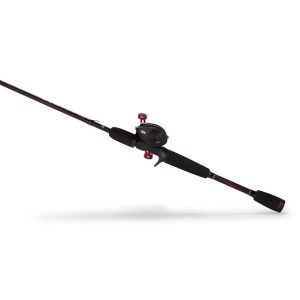 First, stick to name brand products; Lew’s Abu Garcia, Daiwa, Quantum, etc. I know there are other brand names that I could stick in there, but I think you’ll get the point with just those few.

I have bought many Lew’s and Abu Garcia baitcasting combos over the last 5 years that make great beginner combos. And a few of them even make great intermediate level combos. I picked up a Quantum baitcasting Combo from Dick’s Sporting Goods several years ago. The rod was great. I still use it to this day. But I despised the reel.

The reel seemed OK. But it had what I considered to be a very weak spring in the spool release mechanism. There was no real definitive click when you pressed the button to make a cast. I don’t remember the model of the reel. I only fished with it for a short time and then replaced it with something else. Ultimately, I gave the reel to someone else when they lost one of theirs overboard off the back of my boat.

So, the “budget question” will be probably the biggest factor in answering their “Best Baitcasting Combo For Beginners” question. The very least I would recommend be spent is around the $65 mark. That would buy you a new Abu Garcia Black Max Combo.

The other end of the spectrum, since we are dealing with a beginner, is around the $100 mark. That will buy you a Lew’s Carbon Blue GT baitcasting combo.

So in reality, we’re only talking about a $35 difference between the two combos. And either one is affordable to just about anyone. I will talk a little more about the pros and cons of these two combos.

In light of the fact that this is a beginner setup, having a lot of bells and whistles isn’t necessary. In fact, it’s actually better that it not have bells and whistles. What does matter is smooth casting and lack of backlashes.

Those are the most important initial factors when recommending the Best Baitcasting Combo For Beginners. The reel must cast smoothly and it must not be prone to backlashing easily. If it lacks either of these two characteristics, it’s not a good reel for someone to buy as a beginning baitcasting reel.

Again, what matters is that it casts smoothly and it doesn’t backlash easily.

So Which Combo Fits The Bill?

There are two different combos that I will recommend when it comes to the Best Baitcasting Combo For Beginners. 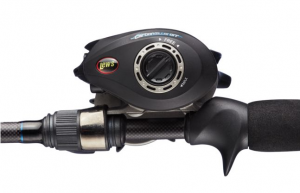 My first pick, for the angler with $100 to spend, is the Lew’s Carbon Blue GT Baitcasting Combo. I own one of these combos in medium-heavy action. I’ve had it for about a year now and it has been a pleasure to use. It casts effortlessly. The reel is smooth, both on the cast and on the retrieve.

The drag is smooth. The reel doesn’t backlash easily and it’s reasonably lightweight. The reel handle is comfortable and the shape of the reel makes it easy to palm for extended periods of time.

The rod is also reasonably lightweight. It’s sensitive and easy to use for a variety of presentations under a wide variety of conditions. Unlike all of the other Lew’s rods that I own, this one actually has a wire hook keeper, which I like. The hook keeper isn’t Texas rig-friendly, but it is, nonetheless, leaps and bounds ahead of the hook keeper on the other Lew’s rods that I own. I use this combo mostly for soft plastics, but it works fine for other types of baits and presentations.

As I’ve also mentioned in my other reviews of Lew’s Rods, their medium-heavy rods are usually a bit on the light side with regard to action. I would classify this medium heavy as medium-medium-heavy, if there is such a thing. The only rod of theirs that I own that didn’t fall into this category was the Lew’s Mach II Speed Spool Baitcasting Combo. That rod is right on the money with the medium-heavy classification. But, being in the $170 – $180 range, I typically wouldn’t recommend it as the best baitcasting combo for beginners unless the angler has the budget for it and it will get a reasonable amount of use out of it after laying down their hard-earned cash for it. 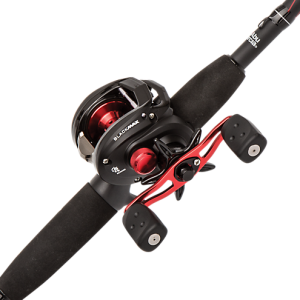 Now, for the angler with less money to spend, I would recommend the Abu Garcia Black Max Combo. I’ve personally bought at least 3 of these combos over the last 4 years and they have all treated me very, very well for the money.

Regarding the Black Max 2 reel, I bought a handful of them for $39.99 from my local Wal-Mart a few years ago. They were all very good reels for the price. Most of them are still being used.

As I also mentioned, I bought three of the Black Max Baitcasting combos. The rods that came with this combo are beasts when it comes to durability. I have not broken a single one of them in the 4-5 years that I’ve owned them. I use them primarily for spinnerbaits and bladed jigs, which don’t require a ton of sensitivity, but I have also used them occasionally for some soft plastics. And they have worked fine for that application also.

And with the Black Max rods, a medium heavy is pretty true to its classification as such. It behaves just as a medium heavy baitcasting rod should behave. I’ve landed fish up to 6 lbs. on these rods. I’ve fished them in open water, in lily pads and in milfoil, timber and rocks. They have handled anything that I could throw at them.

Also, with the Black Max reels, they have actually lasted very well, even when being used under pretty brutal conditions. I even used one a few times for punching lily pads during a club tournament. I would have sworn that I would rip the guts right out of it on the hookset and the ensuing close-range battle in those thick pads. But it held up without so much as a whimper or a hiccup, helping me to yank big bass out of heavy cover and win that tourney.

What I have noticed with the Black Max reels, though, is that usually after 3 seasons or so, they are ready for factory service, to repair or replace any worn parts, if I expect to get much more use out of them with a reasonable expectation of it performing optimally.

I seriously hope this will help people figure out which baitcasting combo is best for beginners. I’ve been totally up front with everything written here (as I always am). I took the angler’s budget into consideration. But, most importantly, I took into consideration which combo will give them the most bang for their buck and will cause them the least headaches once they’ve made their purchase.

So, once more, I personally recommend the Lew’s Carbon Blue GT baitcasting combo for the angler with a $100 budget. Click here to see it now.

And for anglers with less than $100 to spend, I recommend the Abu Garcia Black Max baitcasting combo, which can be purchased for around $60 or so, depending on where you buy it. Click here to see it now.

On the outside chance that an angler has a budget closer to $170, I would recommend the Lew’s Mach II Speed Spool baitcasting combo. This is a much higher quality combo than the other two, but will last the angler much longer. Click here to see it now.