508 Shares
Tackle Test is reader-supported. When you buy products through links on our site, we may earn an affiliate commission. Learn More.

First, let me explain why I have a solid understanding of fishing reel gear ratios.

I’m a gearhead from way back. I used to build muscle cars back in the late 70s and early 80s. I took engines apart and repaired or rebuilt them.

As part of building hot rods, I also dealt with the rear differential of many of those same cars. I would unbolt the entire rear–end of a car and replace it with a rear–end with a different gear ratio in order to attain a desired holeshot or top end speed. This all revolved around understanding gear ratios and what that meant in terms of performance.

Maybe you’re not into or have never been into hot rods. All of this talk of rear–ends and differentials might seem foreign to you. So, let me explain it a little further. Trust me, this will help you when it comes to understanding fishing reel gear ratios 🙂 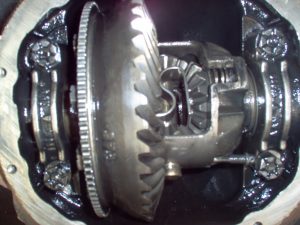 In a car, whether a hot rod or not, the overall performance of the vehicle is greatly affected by the gear ratio of the differential, regardless of whether it’s a rear wheel drive or front wheel drive vehicle.

Let’s take a look at some gear ratios and see how they impact performance.

People building a street rod, who want good out-of-the-hole performance (a good holeshot), will usually run a rear–end (rear differential) with a gear ratio of 4.11:1. We used to just call them four–elevens (411s).

A 4.11:1 gear ratio was a good setup for a street rod because it gave an excellent holeshot, while not running extremely high RPMs when driving normally. Any gear ratio with higher numbers than that would not be good for everyday use on the road because the engine would rev too high at sustained speeds above 60 MPH or so.

It was great for short bursts of higher RPMs, but not on a highway where speeds of over 60 – 70 MPH would be maintained for long periods of time.

A better all-around gear ratio for street rods would be 3.73:1. 373 gears (as we called them) would still give a decent holeshot, but would rev less at higher speeds, making it more street-friendly for everyday use. 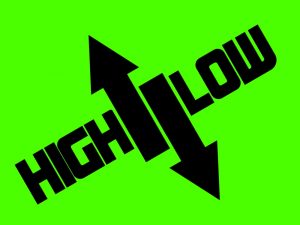 One of the most misunderstood parts of gear ratios in fishing reels is high vs. low gearing.

Most people tend to think that a gear ratio with bigger numbers, like 7.5:1, is a higher gear ratio. But that’s not true. The proper terminology for this would be that it is a high-speed gear ratio, not a high gear ratio.

I know that may seem confusing, but it’s important to remember that a “low” gear ratio is considered lower because it generates more “strength” (torque) at lower RPMs.

But What About Fishing Reels?

In fishing reels the number that we see promoted as the “gear ratio” isn’t a true gear ratio. It’s a number based on how many times the spool rotates for each full turn of the reel handle.

So, if a reel has a 6.1:1 “gear ratio”, it means that the spool turns 6.1 times for one full revolution of the reel’s handle. The internal gears, the diameter of the spool and the length of the handle all come into play when it comes to calculating this.

When we transfer this whole “gear ratio” principle to fishing reels, we don’t worry as much about strength or torque as we would with a car or truck. We are usually more concerned with how fast it can retrieve line, so we can get the fish to the boat more quickly.

When choosing a reel based on the gear ratio, it’s critical to understand how that gear ratio will affect the lures we use. Because of this, it’s also important to take into consideration how the various gear ratios play into the fishing techniques we use to catch fish.

Consider what we call search baits; spinnerbaits, lipless crankbaits, buzzbaits, etc. Despite using them as search baits, which cover a lot of water fairly quickly, there will be times when we don’t want to retrieve them as quickly as when we are searching for active fish.

So, buying a reel with a 7.0:1 gear ratio, which retrieves line pretty quickly, might be good for covering lots of water with a spinnerbait to locate active fish. But if we want to fish that same spinnerbait more thoroughly, at a slower pace, we need to do one of two things; either consciously, manually slow down our retrieve, or switch to a reel with a higher (slower speed) gear ratio that will retrieve the lure more slowly without us having to make a deliberate effort to slow down the speed at which we reel.

Let’s Look at This More Closely

If we use a reel with a 7.5:1 gear ratio, and we find ourselves constantly retrieving a spinnerbait so fast that it rolls over on its side, we would probably benefit from a reel with a higher (slower) gear ratio, like maybe a 6:1.

It will also allow us to fish more thoroughly, helping us to pick up fish that aren’t willing to chase a bait moving at break-neck speed.

Other baits that might benefit from a reel with a higher (slower) gear ratio would be bladed jigs (Chatterbaits), large swimbaits and wakebaits. These baits almost never benefit from high speed retrieves. In fact, trying to retrieve a large swimbait too quickly will usually cause it to lose its built-in action, rendering it almost useless.

What About Bottom Baits?

So, you might wonder about what gear ratio would be best for fishing various bottom baits, like jigs, creature baits or other various soft plastics. These baits usually get their action by rod movements, not from being retrieved by the reel.

But, when a fish bites and the hook is set, it’s usually important to retrieve as much line as possible very quickly. For these applications, the reels with the lower gear ratios (higher numbers) are almost a requirement.

When the hook is set, there will usually be slack created and the angler will need to reel down as rapidly as possibly to take up that slack. Additionally, many other types of presentations, such as flipping and punching require that the fish be turned around and jerked out of thick cover immediately. Again, a low gear ratio (high number) reel will be necessary for this.

I would seriously recommend reels with a bare minimum of 7.0:1. But, 7.5:1 and higher would be even better.

Reels with gear ratios upward of 9.3:1 are actually available now from many companies. These are most definitely best for people looking to flip or punch heavy cover. So, if you want a good reel for multi-use, for several different techniques, this kind of reel would definitely not be the one.

Many manufacturers are now making some of their reel models with various gear ratios available for that same model. Model “XYZ” might be available in 6.1:1, 7.0:1 and 9.3:1. This allows the manufacturer to capture a larger share of the market with their reels because these three gear ratios will cover just about any situation you might encounter.

This isn’t true for all models, but it is the case for many newer reels. So be sure to take the time to compare different models and check the gear ratio before buying them. You may very well be buying the right brand and model, but the wrong gear ratio! 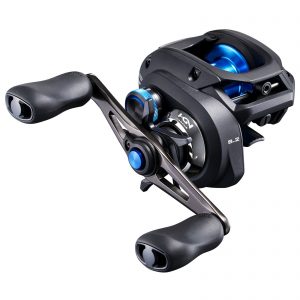 The Shimano SLX DC 150 is almost the perfect all-around reel.

Before I wrap this up, let me give you a few examples of specific reels for different techniques, just so you’ll have a head start when it comes to know which reel to choose the next time you’re in the market.

Let’s start off with a higher gear ratio (lower numbers), for a good all-around, multi-purpose reel.

The first reel we’ll talk about, which is very budget-friendly, is the KastKing Spartacus Plus. This reel has a 6.1:1 gear ratio, which is almost the perfect ratio for a multi-purpose reel. It’s great for moving baits, like Spinnerbaits, bladed jigs (Chatterbaits), Buzzbaits and Crankbaits. For bottom baits, it isn’t ideal, but it will suffice under most conditions.

If you’d like a bit higher end reel that has earned a great reputation among the masses, check out the Shimano SLX DC 150 casting reel. This reel has a 6.3:1 gear ration, also making it an awesome  multi-purpose reel.

The Abu Garcia Revo4 X, which I previously reviewed here, actually comes in several different gear ratios, which is something I had mentioned earlier in this article. So, let’s take a look at what they offer, since this is an excellent quality reel for under $100.

The Revo4 X comes standard in a 6.6:1 gear ratio. As with the Spartacus, this is a great all-around reel that will work for most techniques perfectly. Flipping and pitching might not be ideal with this reel, but it will work for this in limited situations.

Next up on the list, the Revo4 X comes in a 7.3:1 ratio. I would not recommend this reel for spinnerbaits, buzzbaits or similar moving baits. It’s just too fast, unless you seriously force yourself to slow down while your reeling. 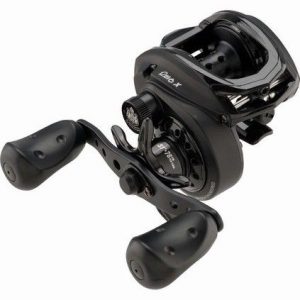 It is, however, a perfect reel for bottom baits, like plastic worms, creature baits, etc. You’ll have no trouble at all catching up with a bass after setting the hook on a slow-moving bottom bait. You’ll be able to take up whatever slack you might have in the line very quickly and then work the bass toward the boat without wasting any time.

The Revo4 X also comes in a 5.4:1 gear ratio that’s perfect for chunking big swimbaits, or even slow rolling heavy spinnerbaits in deeper water. This would also be a good choice for people who have a hard time intentionally slowing their moving baits down when cranking them.

Do you find yourself accidentally burning a buzzbait or a spinnerbait back to the boat without even trying? This might be your cure for that. And, as I said, if you like to chunk monster wakebaits, this should set you up nicely.

And finally, here’s a reel designed specifically for pitching, flipping and punching weed mats, with a monster gear ratio of 9.3:1. It’s the KastKing Speed Demon. This reel is a monster bargain, at just $68.99.

Well, that about wraps this up. We’ve covered from A-Z here, so I hope it has helped you when it comes to understanding fishing reel gear ratios.

If you’ve enjoyed this article, please be sure to share it with others!

Best Baitcasting Reel Under $100
Baitcasting reels around the $100 mark are a notch above those that are, let's say, $80 and under. Because of...
Read More »