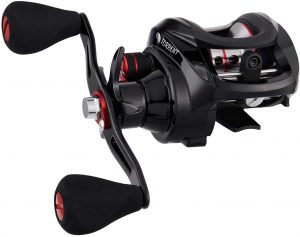 72 Shares
Tackle Test is reader-supported. When you buy products through links on our site, we may earn an affiliate commission. Learn More.

I like trying different baitcasting reels. It’s almost become an addiction. And these days there are so many new ones to try! Earlier this year I bought one of the Piscifun baitcasting reels to test, so now, after using it for several months, I’m sitting here writing this Piscifun Torrent Baitcasting Reel Review, ready to share my test results with you.

The Piscifun rods and reels seem to have a lot of hype surrounding them. Piscifun does a great job of helping create hype with various graphics, videos and other types of media promotions. And while this is good marketing, how do their products hold up under real-world use and the scrutiny of people like myself, hardcore anglers who buy them just as much for testing and reviewing as for catching fish?

Read on to find out.

When my new Piscifun Torrent Baitcasting Reel arrived, I have to admit that I was excited to open it up and take my first look at it. I was anxious to see how the reel looked. But more importantly, I was interested to see how it felt in my hands.

As I’ve mentioned in past reviews, one of the first things I do when holding a casting reel for the first time, I like to give the handle a spin or two. This gives me a feel for how freely the bearings allow the handle to spin after I have let go of it.

So, I gave this one a spin. How did it do? It was OK. Not terrible, but not fantastic.

Next, I did what I always do second. I pressed the spool release and gave the spool a spin. I waited to see how long it would spin in free-spool mode. Again, it was OK. I’ve seen worse, but I have also seen better.

So far the Piscifun Torrent Baitcasting Reel was average.

My initial plans for this reel were to use it on a medium action rod to throw small soft plastic baits, like a weighted 4 inch Senko style worm. I have a lot of success with that bait under tough conditions if I fish it with a 1/16 oz. bullet weight. And the Abu Garcia Pro Max 3 casting reel that was previously using handled that bait well.

I spooled the new reel up with 14 lb. test Sufix Siege mono. Then I slid the 1/16th oz. bullet weight onto the line and tied on the 2/0 Eagle Claw wide gap hook that I always use for this setup. Then I set the rod and reel on my front deck, prepared for my next trip out. A day or two later I was on the water, giving it a try.

As I made my first few casts with the Piscifun Torrent Baitcasting Reel, I knew immediately that this reel might not be the right one for this setup.

I got only about half the distance from this reel that I was used to getting from the Pro Max. So, I started making various adjustments to the brakes, hoping to get back the distance I had lost by switching to this reel.

Unfortunately, the only way to get anywhere near the distance that the Pro Max was giving me, I had to back the brakes off to the point where it was on the verge of a backlash with every cast. The only way to prevent a backlash was to really feather each cast with my thumb. And if I made any casts into the win, this because a bothersome exercise in futility.

Ultimately, I put a Pro Max on this rod and went back to using that reel for the 4 inch Senko setup. I had no further headaches with short casts or backlashes.

So now I had to decide what this reel might be better suited for. This reel has a 7.1:1 gear ratio, so it really wasn’t the best candidate for spinnerbaits or crankbaits unless I forced myself to reel slowly enough to make up for the fast gear ratio.

As you can see so far, doing this Piscifun Torrent Baitcasting Reel Review was becoming a challenge. I wanted to like this reel. I wanted to find the “sweet spot” that this reel might be able to plug into, and then live happily ever after with it. But I could see that might take some work!

The Specs and Features 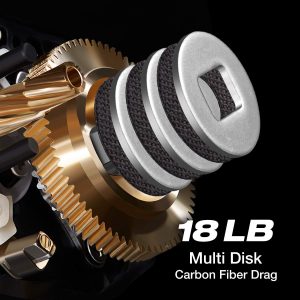 Before I continue with the real-life parts of the Piscifun Torrent Baitcasting Reel Review, let’s take a look at the specs and the features that make this reel.

As I mentioned above, it sports a 7.1:1 gear ratio. That makes it a fairly fast reel with regard to lure retrieve speed. This also means that it’s best suited to techniques that require a lot of line be retrieved quickly, like maybe soft plastics, jigs, etc.

It could be used for moving baits, like spinnerbaits or buzzbaits, but only if the angler pays close attention to their retrieve speed, so as not to unintentionally burn the bait back to the boat.

Back to The Real-World Review

Now, let’s get back to the actual on-the-water stuff that makes these reviews worth reading.

After being disappointed with the reel’s casting performance with a light lure, I started playing with it intermittently, trying different lures with it.

Ultimately, I ended up tying a 1/4 oz. buzzbait on that medium action Lew’s Carbon Fire casting rod and giving that a shot. Despite the high speed gear ratio, this seemed like a good match up. I just made sure to pay close attention to my retrieve speeds and kept it slow.

So, after all of this tinkering and experimenting, how did the Piscifun Torrent Baitcasting Reel handle bass?

I’m happy to say that it handled them well. The drag worked well and the reel was powerful enough to handle bass up to 3 1/2 lbs. in fairly dense weed cover.

Fighting a fish was effortless with this reel. So, despite its shortcomings with regard to the lack of ability to cast lighter baits, it did perform well when playing fish under all conditions.

As I have spent time using this, I have run into a few annoyances. They are not major, at least at this time, but they do concern me.

First, as I mentioned earlier, it doesn’t cast light lures very well. Even the 1/4 oz. buzzbait that I’ve been using with has to be cast carefully if casting into the wind. So it wasn’t just the 4 inch soft plastic bait that was problematic.

I would honestly recommend that this reel be used on a medium heavy rod with baits that are 3/8 oz. or heavier, to avoid the problems I ran into with the lighter baits.

This issue isn’t big enough to cause me not to recommend this reel. But it is an annoyance, nonetheless.

The second thing that bugs me about the Piscifun Torrent Baitcasting Reel is that the thumb bar has gradually gotten to where it doesn’t depress as freely as I would like it to. It also doesn’t have the strongest spring attached to that thumbar, either.

So, pressing it isn’t smooth, and it doesn’t give me a feeling of great confidence that it will firmly snap back up and lock into place when I begin a retrieve.

Granted, I have not had any problems with it acting up in this way, but the fact that the thumb bar doesn’t depress as smoothly as any of my other reels concerns me.

It more than likely just needs a bit of oil. But since this reel has not seen nearly as much action as so many of my other reels, which don’t hesitate or bind at all when I press them, it makes this reel feel cheap, and of lesser quality than it should feel.

The final thing that bugs me about this reel is the handle and its grips. Really, its mainly the grips. They are small, and they feel cheap. They’re not uncomfortable to use. They’re not slippery. They are just small and don’t create the feeling of confidence I like to feel when I grab hold of them.

Again, this isn’t a major issue. Just an annoyance.

Let’s Wrap It Up!

The Piscifun Torrent Baitcasting Reel is a decent reel. It’s not a great reel. But it’s not a terrible reel, either. As I said, it’s a decent reel. And for the $39.98 price tag, it is a good deal.

Honestly, for a few dollars more, I would rather see people buy the KastKing Spartacus casting reel. It only costs a few dollars more and gives a lot more for the money. And it has become one of my favorite purchases of the 2019 season, proving to be an excellent value for the price.

But, if you prefer to stay under the $40 mark, I will admit the the Piscifun Torrent Baitcasting Reel is a decent reel if fished with the right combination of rod and lure.

Just remember to use it for heavier baits, weighing 3/8 oz. or more.

You can check out the Piscifun Torrent Baitcasting Reel by clicking here.