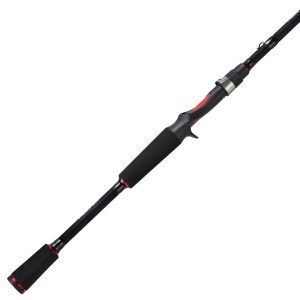 18 Shares
Tackle Test is reader-supported. When you buy products through links on our site, we may earn an affiliate commission. Learn More.

Several months ago I started looking at the Piscifun Torrent Baitcasting Rod on Amazon. I had been reading the reviews intermittently, trying to get a feel for whether or not I wanted to buy this rod to test it.

I was on the fence about it for a while. The rod retails for as high as $72.00 on the Piscifun website. But Amazon sells it for $58.99. So, when I got an alert from them that it was available for a ridiculously low price of $44.24, I went ahead and bought one.

Would it Be Worth It?

Even at the discounted price, I wasn’t sure if I’d be happy with the rod or not. As I’ve mentioned several times in other fishing rod reviews, I hate buying a rod without being able to hold it in my hands first. I prefer to be able to feel it. Typically, the only way I will buy a rod online is if it’s a duplicate of something that I already own. This way I already know that I like the rod.

So, with all of that said, let’s get into the actual Piscifun Torrent Baitcasting Rod Review.

I bought the Piscifun Torrent Baitcasting Rod in the 7′ one-piece medium heavy model. My hope was that it would be a good fit for a lot of the types of fishing I do. The plan was to pair it up with a good casting reel and 17 lb. line. I didn’t know for sure what technique it would work best for, since I hadn’t held it in my hands yet.

So when it arrived, I put a new Abu Garcia Revo4 X reel on it and spooled some 17 lb. line onto it. And into my rod locker it went, waiting for my first fishing trip of the 2019 season.

Then The Ice Melted

I forgot to mention that I bought this rod when there was still ice on the local lakes where I live. But when the ice melted, I didn’t waste any time getting onto a local lake and giving the new rod a try.

I ended up trying a half ounce spinnerbait onto it. And, thankfully, I caught a couple fish on it during that first outing.

As I made my first dozen or so casts with it, I was paying close attention to the rod, trying to get a feel for it. I was especially attentive when it came to how it felt and how it behaved. And when I landed a couple fish, I watched the way it handled those fish.

My initial impressions were good. But not fantastic.

The first thing I noticed was that it was a tad less responsive than I had hoped for. What do I mean by that?

I mean that the rod may be a medium heavy power, but I don’t consider it to be fast action, which it is advertised as being. When a fish hit my spinnerbait and I set the hook, the rod was a bit sluggish to recover from the hookset. I had to work hard to catch up with the fish and get it coming my way.

This happened with other fish too. So I knew that it wasn’t just the way the first fish hit the bait. 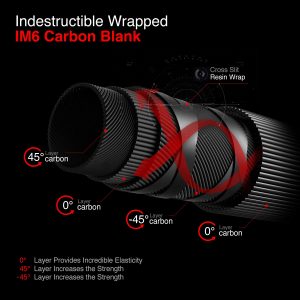 I have spent quite a bit of time checking out how the rod was built. This includes looking at the materials, as well as how everything was assembled.

First, this is a carbon rod, not graphite. I like carbon rods. They are usually very light and sensitive. This rod is definitely light. As for being sensitive, it is. But maybe not as sensitive as the Lew’s Carbon Fire rods, which have become my favorite rods over the last two years.

Also, I looked at the guides themselves, and how they were made. They are listed as “Premium Titanium Oxide” guides. But to me they look a bit on the cheap side. I say this only because they seem big and “ugly”. They are a shiny chrome or nickel finish, which makes them stick out like a sore thumb. They really give the rod a cheaper look.

This rod has a really comfortable reel seat and grip setup. The reel seat is graphite, for sensitivity. The grips are eva foam. They just feel good in my hands. The area where the reel is mounted has what Piscifun calls an O-Seat design, for ergonomics and comfort.

As I’ve mentioned in all of my other rod reviews, the rod’s hook keeper is always a big deal to me. Piscifun got this one right… sort of. They did use a wire hook keeper that’s located in a good spot. Unfortunately, it’s not Texas rig-friendly. But I didn’t deduct anything for it not being non Texas rig-friendly. 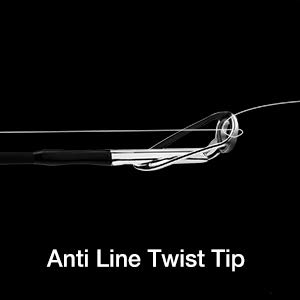 The tip is advertised as Anti Line Twist. This is because it has two little pieces, one on each side, that prevent the line from being able to wrap around the tip and get caught.

I guess this is a good idea. As they say, an ounce of prevention is worth a pound of cure.

But it’s not often that line twist is an issue with casting rods and reels. So I’m not sure if this is a major addition or not. But it’s definitely not a minus. So let’s just say that we should never have to worry about the line twisting around the tip and getting caught.

The Piscifun Torrent Baitcasting Rod has gained a reputation for being a very rugged, durable rod. This has happened mainly because of a video that has been around for a while now. And, to be honest, this video was part of my decision to buy this rod and test it.

The Video Caught My Attention

At some point during my initial research, I watched a video where a couple guys did everything they could think of to try to break one of these rods. They were absolutely brutal. No matter what they did, this rod simply would not break. Ultimately, they ended up attaching the rod to a fence and tying it onto the hitch of their pickup truck. Even this would not break the rod blank!

But, just because a rod doesn’t break easily doesn’t automatically mean it’s high quality. It just means it’s tough. Case in point, look at the Shakespeare Ugly Stick! That rod is also virtually unbreakable, but almost nobody will call that rod a high-end rod. In fact, the Ugly Stick is typically highly regarded by inexperienced anglers who don’t want to spend more than $40 or so on a rod and reel combined.

So it is with the Piscifun Torrent Baitcasting Rod. It is extremely tough. But I wouldn’t rank it as highly as the Lew’s Carbon Fire rods.

Now that I’ve had some time to fish with the Piscifun Torrent Baitcasting Rod, I will say that I think it’s a good rod. It’s not an excellent rod or a great rod. But it’s definitely a good rod.

Do I think it’s worth $70? No, not really. But I do believe it’s a decent value for under $60. And if you can grab it at a discount from Amazon, it makes it an even better value.

There is no doubt that this rod is well-made. It’s just not what I would consider to be a high-end rod. But, for the price, especially with a discount, it will make a very good rod for most anglers.

With that said, I am giving this rod a very solid 4 star rating. If you’re in the market for a good rod that will last a long time and won’t break the bank, the Piscifun Torrent might be just what you’re looking for.

You can check out the Piscifun Torrent Baitcasting Rod by clicking here.

Lew’s Carbon Fire Baitcasting Rod Review
Let me start by saying that the moment I picked this rod up in the store, I was impressed. Why?...
Read More »